This is a unique award for the recognition of the “Outstanding Contribution to Irish Tennis” personality and was first presented in Carrickmines in 2009.

The award recognises the outstanding contribution made by members of the tennis community in making a material difference to the development of Irish tennis.

Established to select recipient and to develop and promote award.

Gerry established veteran’s tennis competition in Ireland! He was instrumental in setting up the national senior team’s representing Ireland in the ITF International competitions. A two times winner of the British Open O80s Singles title.

A Senior International player and played in the DLTC Leagues for eight decades! June Ann is a former Carrickmines Lady Captain and she won the County Dublin Ladies Singles three times. She played in the Grand slams and was winning her Semi-final of the French Open Mixed Doubles, at Roland Garros in the late 50s only for her partner, Manuel Santana, having to retire with an injury.

Ireland top player for over a decade. Joe played Davis Cup for Ireland as the leading player and also NPC to the team after his playing days were over. He won the Open singles in Carrickmines five times, a record for the Men’s. Joe was chosen to be the Fitzwilliam President in their centenary year, 1977 and is also a member of the All England Club.

Joe on the right receiving the award from President Pat Delany with tennis Director Pat Crowe.

Harry was a former International Player and Captain of Ireland, His legacy was establishing the “Barniville Babes”,christened by Irish Times Columnist, Vera McWeeney, (herself a former international player and member of Carrickmines). This initiative spring boarded many future Irish Champions and improved the quality of tennis substantially. Harry represented Carrickmines on the Leinster Branch of the ILTA & Tennis Ireland and was a Past President of Fitzwilliam.

Jim was presented with the 2013 award for “Outstanding Contribution to Irish Tennis”. Jim has been a regular visitor to Carrickmines, winning the Men’s Open Singles four times spanning three decades!

Jim was a regular member of the Irish Davis Cup Team.  In 1983, he played on the Irish team, the only time Ireland played in the World Group. Ireland narrowly lost to a John McEnroe inspired USA team before a packed audience at the RDS in what was the golden era for Irish tennis. After retiring from playing, Jim captained the Irish Davis Cup Team for seven years and also captained the team in the Seoul Olympics in 1988.

Conor was presented with the 2014 award for the “Outstanding contribution to Irish Tennis” at Open Week Finals Day Presidents lunch on 12th July.

Conor reached an ATP Ranking of 129! He won three Challenger Events in India, and both the Austrian and Israel Opens. He also qualified Wimbledon and the US Open where he lost to the eventual champion Novak Djokovic in the Arthur Ashe Stadium Court. He has played for 13 consecutive years on the Irish Davis Cup teams, as the leading player, from 2000 -2013.

His career was unfortunately cut short with hip injuries in 2013 but Conor remains active in tennis. He coaches at the National Tennis Centre in DCU and with some of the most promising juniors in Carrickmines.

Conor receiving the 2014 award from Club President, Cathal Muckian with Tennis Director, Pat Crowe and below pictured in action at Wimbledon in 2011.

Tom is the founder and driving force behind Parks tennis in Ireland.  The scheme was founded over 40 years ago giving many the opportunity, including many of Irelands top players to play tennis.

Probably best known for his very successful FORTY years running of the Irish Open Junior Tennis Championships of Ireland – at Fitzwilliam, where he is also a prominent Member.

All of the best juniors of this long reign – would have been overseen by Henry, along with their parents!

Henry was the first Irish official to be awarded a Gold Badge by the International Tennis Federation and Refereed many tournaments including the Irish Open.

A keen supporter of the sport of kings – Henry is also a racehorse owner. Rumour has it that many bookmakers’ only want to see the ample back of him!

He is also a golfer and “organises and runs” the many Law Society golf outings during the year; I wonder does he have any trouble with “golf parents”!!!

In between times he managed to become a Partner in one of the biggest legal practices in Dublin  -and  even  has some acquaintance with Apothecaries in his native town of Kells.

A man of many skills, sports and legalese.

Geraldine has played at International level more than 70 times, in tennis alone, and amongst others has beaten Virginia Wade, in both Singles and in Doubles (partnered by Eleanor O’Neill). She played in 10 Federation Cups.

Playing for Ireland, when she was just 20, Geraldine has played against some of the great names of tennis including – Billie Jean King. In 1964 she took Christine Trueman ( Wimbledon runner up in 1961) to 3 Sets, and in 1966 won the Irish Ladies Doubles playing with Margaret Court.

Uniquely, she has won the Co. Dublin Championships (Carrickmines) on no fewer than 9 occasions – a record!

Wife to our own great late Harry Barniville, a man of no mean achievement, this medical duo together won many mixed titles. Harry was recipient of this award in 2012; we are delighted that Geraldine will now complete the “slam”.

Owen is one of Ireland’s most outstanding tennis players of all time. He represented Ireland in three Olympic Games and played Davis Cup for many years. He holds the record for most wins for Ireland. On the world level, his record for consecutive wins was only beaten by Rafa Nadal in 2018. As a coach, Owen has captained both the Davis & Fed Cup teams and coached a host of juniors who have gone onto international tennis. He won the Co Dublin Championships, in Carrickmines three times in a row from 1998-2000.

Lesley is one of Ireland’s outstanding tennis players and coaches with a truly remarkable record in the senior circuit.

Sean was the first Irishman to make an impact in professional tennis. During his career he competed against the very best including Rod Laver, Bjorn Borg and John McEnroe.

In 1983, Sean along with Matt Doyle, spearheaded the Irish Davis Cup team that qualified for the World Group for the first and only time. After a narrow defeat to Italy, Ireland hosted a star-studded USA team in front of a packed RDS arena. losing narrowly.

After his playing career Sean lived in Stuttgart where he and his wife, Helga settled. They had two sons and two daughters. Both sons, Kevin and Louk also played Davis Cup for Ireland. 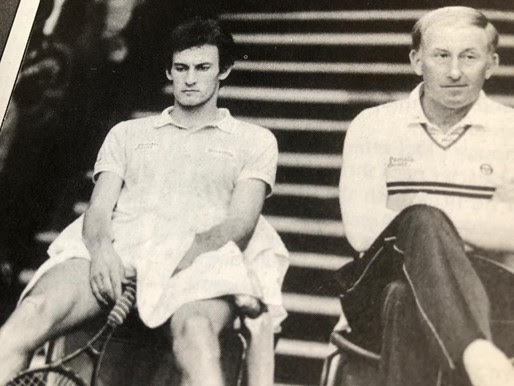 Sean looking dejected after his defeat to John McEnroe in the 1983 Davis Cup with Team captain Michael Hickey. 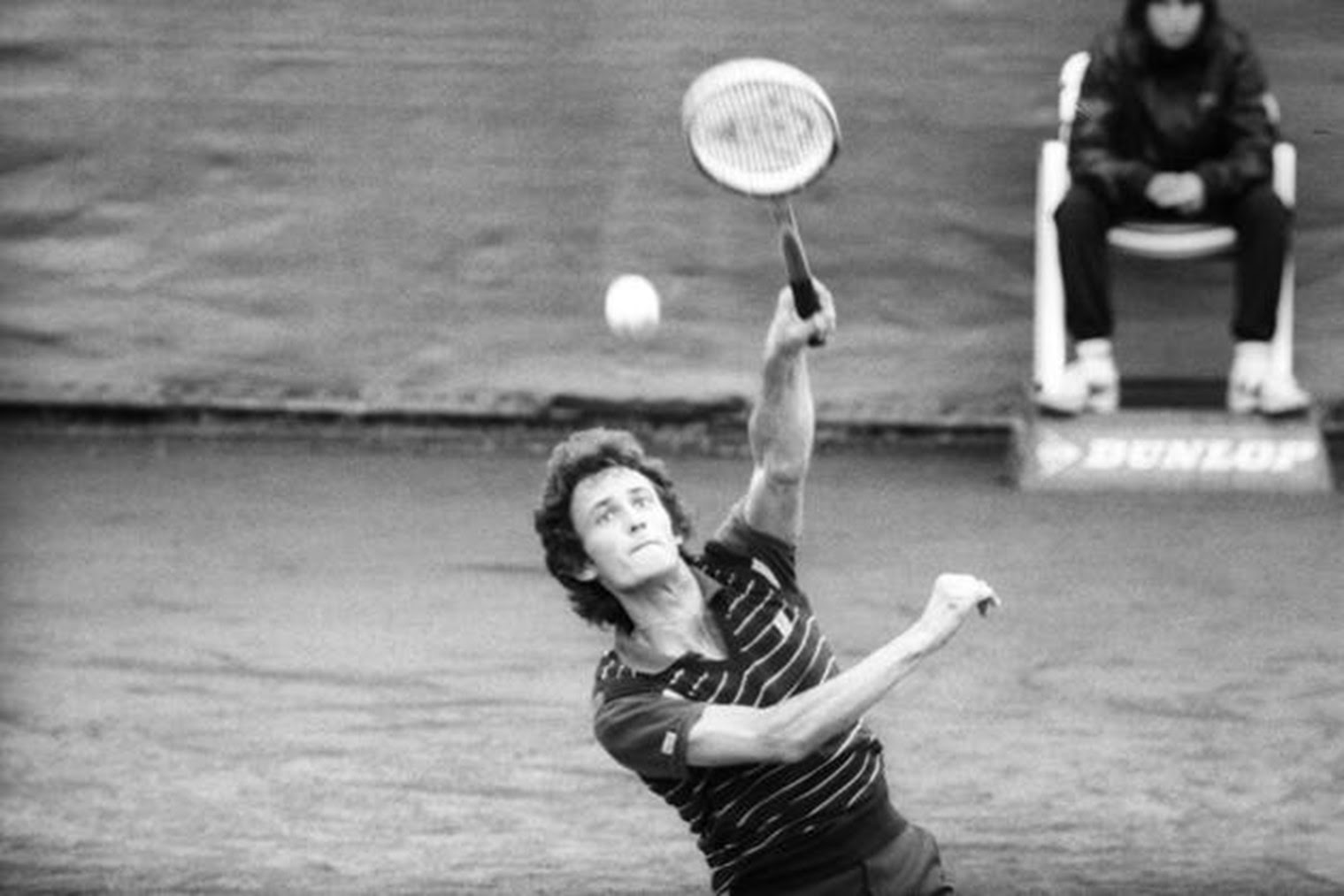 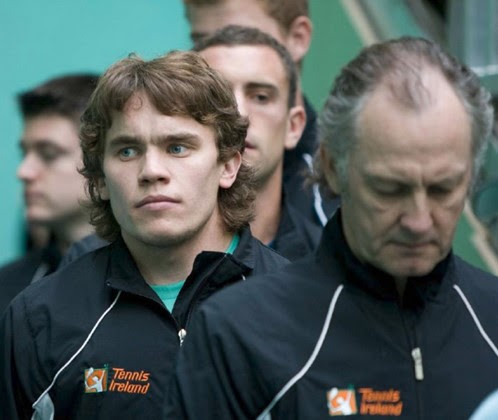 Sean as Davis Cup captain in the foreground followed by his son Louk, in 2010 against Turkey in Dublin.

2021: Matt Doyle – Californian Matt Doyle’s Irish connections were first established through his friend Sean Sorensen.  Together they went on to forge Ireland’s most successful period in the Davis and Kings Cup in the professional era. The highlight was qualification for the Davis Cup World Group and the home tie against the John McEnroe inspired USA team.

Doyle played in 17 Davis Cup ties for Ireland over 8 years with an impressive 19/10, win/loss record.

Matt was Ireland’s highest ranked professional and played in all the Slams. He reached the 4th round in the US Open in 1982 before losing to the holder, John McEnroe.

Late in his career, knee operations hampered Matt’s mobility and he retired. He remained active in the sport for a number of years afterwards serving as the ATP President from August, 1985 to August, 1987.

He was the Irish Open Champion on six occasions and won the County Dublin Championships in 1986. That year Matt was made an Honorary Life Member of Carrickmines C&LTC in recognition of his service to Irish tennis by the Club President, John Moore.

Matt Doyle joined Mats Wilander’s coaching team in 1988. Wilander went on to win three of the four Slams that year! The Australian, the French, and the US Open.  He won seven Grand Slam singles titles over his career.

Matt in his role with Tennis Ireland brought the ITF world Coaches Conference to Dublin in 1991 with coaches from all over the world descending on the capital.

Matt pictured with the U.S conference delegate Stan Smith the 1971 U.S Open and the 1972 Wimbledon Champion.

2022: Yvonne Doyle
Yvonne is a three-time County Dublin Champion and former Ireland Fed Cup Captain and player. In a long and distinguished playing career, Yvonne represented Ireland as a player in the Fed Cup for 11 years and a further 6 years as Captain. She defeated Miriam Oremans in a Fed Cup tie against the Netherlands. Oremans, a silver medalist in the Sydney Olympics and finalist in the Wimbledon Mixed Doubles.

Yvonne also had a doubles victory (with Elsa O’Riain) over Sam Stosur from Australia, in the final of an ITF in Glasgow. Stosur was the US Open Champion in 2002 and won the Doubles titles at the U.S. French and Australian Opens.

Yvonne was Irish Open Champion in 2001 and had a career high ranking of 238 in singles and 201 in doubles.

Originally from Castleknock, Yvonne now lives with her family in Wicklow and along her husband David are actively involved in coaching tennis.